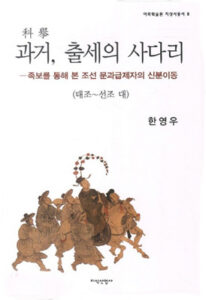 Han Youngwoo’s new project examines social mobility in Chosŏn society by analyzing the social background of about 15,000 civil service examination degree-holders, based on family genealogies and diverse material covering the entire Chosŏn dynasty. This book is the first volume of a larger project, focuses only on the early period from King Taejong to King Sŏnjo (1392 to 1608), and accordingly analyzes a subset of 4527 degree-holders. The major content of this book can be roughly divided into three parts. First, it lays out major themes of the Chosŏn status system and introduces the methodologies and sources of the book. The second part provides an in-depth examination of family backgrounds of civil service examination degree-holders. Through microscopic investigation of a variety of private documents and by tracking down genealogical links, the book lists the names of exam degree-holders from lower classes and explains why the sources identify them as members of the lower class. The last part of this book concludes by pointing out some overall features of the status system in the early Chosŏn period.

In the introduction, the author strongly criticizes previous studies on social mobility and civil service examination degree-holders for the following three reasons. First, they usually rely exclusively on the Chosŏn Civil Service Examination Roster Database, but the database has limitations when one tries to trace social backgrounds of civil service officials. Because key sources such as parents and grandparents’ names and career posts are frequently omitted in several cases, it is hard to determine their social status from the Roster Database alone. Second, existing analyses suggest that the consanguineous clan unit, composed of descendants from a single patrilineal ancestor, had become the major determinants of a person’s position in society. However, most clans consisted of many different kinds of classes, thus the clan unit should not be considered as unitary. Finally, major clans were given too much emphasis, while minor ones were neglected. As a result, these earlier studies concluded that only a small numbers of major family clans produced almost 90 percent of the total degree-holders throughout the entire Chosŏn period, which, in turn, apparently proves to “unchanging and closed Chosŏn society.”

In contrast, first, Han Yongwoo includes more diverse sources to trace social backgrounds and family origins of civil service examination degree-holders such as family genealogies, Annals (Sillok), gazetteers (geographies) as well as the Examination Roster Database. Second, he assumes that clans cannot be an analytical unit to examine the degree of social mobility; rather he highlights the significance of different roles of subgroups even under the same family name. Finally, he stresses the rise and fall of minor clans, thereby demonstrating the possibility of vigorous social mobility. Based on these different methodologies, the author successfully explores the social background of all civil service examination degree-holders, and based on quantitative analysis reveals a general trend of upward movement throughout the dynasty.

According to his analysis, between 1392 and 1422, around 40 to 50 percent of all degree-holders came from lower classes. Although their share decreased over time, for the entire early Chosŏn period, about 24 percent of all degree-holders had a lower-class family background. This means that more people could achieve higher social status through civil examination at that time than previous studies presumably assumed. To be specific, Professor Han categorizes and analyzes the lower social classes where the successful degree-holders came from.

However, this volume is a kind of descriptive summary of what professor Han found from the diverse resources, and thus it still lacks elaboration on deeper implications and wider discussions following the analytic results. Also, because volume 1 covers a limited time period, it is hard to draw the whole picture of the dynasty. Such observations notwithstanding, Civil Service Examination System; the Ladder of Success is to be complemented for stepping forward and providing a more concrete and solid analysis of Korea’s pre-modern period. This book makes a huge contribution to our understanding of the civil examination system of the Chosŏn era and its meritocratic feature.