The Discovery of Society: Theories, Imaginaries and Practices of 'Sahoe' in Colonial Korea (1910-1925) 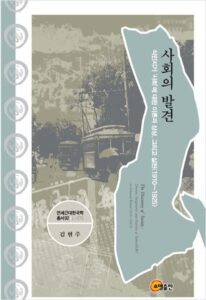 What is a society and how can it be represented? These seemingly simple questions have been at the core of Sociology. As the notion of a society was imported from the West and adapted by different groups for their own (political) purposes, Korean scholars often twisted the question around to ask how the concept was translated and understood under certain historical contexts of Korea. This book, entitled “The Discovery of Society,” is a part of those efforts. The author shows how understandings about the concept of “society” changed in line with historical transitions from pre-colonialism to colonialism in the 1910s, and from repression to appeasement policy around 1920, by studying major debates on “public funerals” (Sahoejang) honoring socially meaningful figures and the “national reformation”(Minjokkaejoron) aimed at enlightening the masses.

Whereas previous studies tended to trace the genealogy of the term “society,” treating it as a physical or discursive substance, this book shifts its focus to the senses—of the common, of the public, and of legitimacy—people shared, following Charles Taylor’s idea of the social imaginary. Shared or conflicting imaginations over a society played a key role in paving the way for the future, determining what the society was, who represented it, and through which measures, under the colonial rule. The author, a scholar of Korean literature, accomplishes this in a particularly impressive way, by analyzing writing genres—proposals and criticisms—and their underlying scientism in addition to explicit controversies.

Due to the sense of crisis that neoliberal reforms engendered, not only individual lives but also in the social sphere, more and more sociologists have engaged with the questions of the social from an ethical perspective. Looking into the history of social imaginations, as the author explains, is crucial but unconventional. Discourse analysis is, however, destined to be elite-centered intellectual history, as the main materials such as newspapers and magazines were written by intellectuals of the time. By viewing the general public only as recipients and consumers, this book itself reproduces an elitist approach shared by intellectuals. In this regard, reclaiming the general public’s authority in imagining a society and practicing the social is a remaining task for this project.