Favoritism: the monarch’s relationship with subjects based on private trust and the unfolding of Western Han history 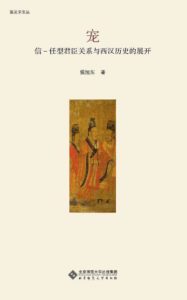 “The emperors of western Han chose their courtiers wisely, and their dynasty flourished. The emperors of eastern Han chose poorly, and they doomed the empire to ruin.” This is an excerpt from Zhuge Liang’s immortal and famous memorial Chu Shi Biao. Though many have taken this as an unquestionable and valuable lesson learned from Han history, Hou Xudong’s book gives us an entirely different picture of western Han history. In an interesting and well-written book, Hou unfolds western Han history by bringing readers’ attention to one particular aspect of emperor-subject relations: the emperor and his favorites. As it turns out, the emperors of the western Han were not so wise when it came to choosing their favorites.

Within the official ideology of Confucianism, the emperor-subject relationship ranks first amongst the Five Bonds[1]. In its doctrine, a wise and moral emperor should always stay close to integral officials (xianchen) and Junzi while any favorites of emperors are regarded as pernicious (p.10-11). With a mastery of dense historical records and archeological findings and a delicate and extraordinary capability of historical analysis, Hou is able to first revive in vivid detail the living experience during the western Han (ch.1-8), then provide provocative and original historical arguments (ch.8-10). Hou argues, in contrast to other historians’ analyses, that the Chinese emperor-subject relationship could be divided into two categories: (1) the private trust emperor-subject relationship (personal) and (2) the ritualized one (impersonal)[2]. In his book, Hou attempts to both overcome stereotypes and fill the void in historical scholarship, left by constant negligence towards the former relationship (emperor and his favorites). In Hou’s framework, the subjects favored most by the emperor are not exclusively courtiers and officials, but rather all those who have established a close and personal relationship—including concubines, eunuchs and consort kin.

Hou first identifies certain remarks in historical documents that indicate unusually close relationships between an emperor and his favorites, both explicit terms used by Han historians[3]and implicit records that would reflect a special relationship[4] (ch.2). After detailing a brief but complete record of all the favorites of every western Han emperor and the favorites’ general life stories (ch.3), he summarizes the ways such relationships were built[5], sustained, gained[6] and eventually ended[7] (ch.4). The reason this emperor-subject trust relationship (personal) persists is in part due to the gradually established ritualized relationship (impersonal) that makes the emperor feel lonely and insecure. To seek security and protect himself, the emperor always sought to maintain close and loyal relations. In the meantime, subjects continually used a variety of methods to curry favor and trust from emperors in order to gain power or simply to have a better life[8](ch.5). Though Confucianism doctrine asks officials to cultivate themselves and condemn the emperors’ favorites, Hou found that, objectively speaking, Confucian officials also attempted to gain favor by using speeches and petitions[9] to persuade emperors to seek counsel from wise men (often themselves). Essentially, Confucian officials are similar to others in terms of gaining the emperor’s favor (ch.6). Moreover, through a careful reading of all currently available documents and archeological findings, Hou argues that this particular relationship dynamic is not just unique to emperors and their favorites but is consistent throughout the whole Han empire. Hou goes on to cite numerous attempts of building and sustaining similar personal ties on multiple levels (ch.7).

In his last three chapters, Hou elaborates on how this private trust emperor-subject relationship became perennial and recurring in Chinese history and the theoretical significance of studying such a theme. The Western Han emperor was entwined in relationships on three levels: (1) emperor and subjects (divided into the two relations stated), (2) personal relations with the royal family, and (3) the emperor as an ideal emblem of publicity (tiandao). Due to the gradual establishment of impersonal, ritualized, and bureaucratic procedures in the Western Han Empire, it had already built a delegation system in which a prime minister (chenxiang) was in charge of all practical political affairs while the emperor stayed a token figurehead. Emperors all seek to develop personal and private ties to gain practical and direct influence in politics or to simply feel secure (216). Envisioning an emperor to be a mere emblem collided with the emperors’ personal desires and needs. When Confucian officials are intolerable to emperors’ personal ties, they are also part of this relational process. Hou’s study powerfully demonstrates that the ideal emperor-subject relationship in Confucianism contains inherent and irresolvable conflict within itself, which consistently recurs throughout Chinese dynastic history[10].

From the institutional perspective of the empire, Hou argues that the private trust emperor-subject relationship is primary and natural instead of secondary and derivative[11]. The principle behind the Han Empire’s rule is a limitation of popular mobility, which makes local interaction and communication within the empire quite rare. Both institutional settings and ideal doctrines encourage and teach men to be obedient by staying and living where they are, thereby making most Han subjects mobilize primarily at the county level. Corresponding to Fei Xiaotong’s analysis, traditional Chinese society is a society without strangers, a society based totally on the familiar. Intimate relations constitute everyone’s everyday life in the empire. Even for an emperor, personal relations remain natural and primary. Universal and abstract trust between strangers is impossible to cultivate, resulting in a persistent tension between a universalized empire and diffused, differentiated subjects. The more complex and larger the empire is, the more private relationships the emperor needs.

In terms of the significance of Hou’s study, there are four aspects. First, if we view the private trust emperor-subject relationship as a process of building, sustaining, gaining and losing the emperor’s favor in which most subjects are involved for different reasons, the relational mechanism constitutes the everyday life of everyone involved and it also reflects the dynamic of rule in the Han empire. However, this kind of relational dynamic is often characterized with contingency, special contexts and personal tastes. Attempts to build and sustain such a relation are often opportunistic and arbitrary, which would not result in impersonal and sustainable practices that transcend each emperor’s private and personal character.

Secondly, such a relational dynamic could be viewed as an alternative to Fei Xiaotong’s famous concept The Differential Mode of Association (chaxugeju) in his analysis of Chinese society. Hou reminds us that when Fei’s model defines the relationship-kinship as similar to the concentric circles formed when a stone is thrown into a lake, the private trust emperor-subject relationship is more like a whirling system where everyone centers around the emperor and other subjects center around the emperors’ favorites. In it, there is an apparent difference between public and private, family and state. It is a pity that Hou only discusses this point briefly.

Finally, reflecting also on Weber’s terminology, Hou argues that the private trust emperor-subject relationship could be seen as a detailed analysis of the patrimonial part of patrimonial bureaucracy, an exemplar of a typical model of practice which would contain different mechanisms that are useful in explaining the evolvement of Chinese history. It in part elaborates in detail on Weber’s famous argument that such a relationship would not result in a revolutionary breakthrough in China compared with what Weber finds in The Protestant Ethic and the Spirit of Capitalism, that Protestants seek God’s grace and lead to the emergence and bloom of capitalism.

Methodologically speaking, Hou consciously avoids and tries to transcend a linear view of history that is prevalent in current historical studies. He succeeds in illuminating aspects and undercurrents of history that are commonly overlooked, in bridging the specific study of political historical events and phenomena and a structural approach to the study of emperor-subject relationships. It intends to unveil how the recurring words and deeds constitute history in detail.

Back to the beginning, the most ironic yet vivid example of how the private trust emperor-subject relationship is inescapable remains the fall of the Eastern Han. Though Eastern Han rulers clearly learned the lesson of avoiding such relationships from the ruin of the Western Han, the Eastern Han was inevitably doomed in the same way. Overall, the book is worth reading in terms of its accurate historical analyses, mastery of historical records, original arguments and findings. With rich historical evidence and a masterful arrangement of it, Hou shows a possibility in combining theoretical and structural concepts with concrete historical facts and details. The book would be insightful for anyone who is interested in not only Chinese history but contemporary Chinese politics. It is a vivid example of how “histories make men wise.”

[1] 五伦：君臣，父子，夫妇，长幼，朋友 An exception could be found in Mencius, in which he placed the father-son relationship prior to the emperor-subject relationship.

[5] Basically, living together or growing up together is the main way to build a private relationship with the emperor: friends from youth, brothers and cousins, consort kin, wet nurses, eunuchs, courtiers and masters. And the other way is more of historical contingency: like at the first sight, recommended by others, or simply consort kin.

[6] Based on the two ways of gaining the emperor’s favor, many people at that time tried different ways, which is also reflected in historical documents.

[7] Such a relationship often ended with the emperor’s sudden death or the emperor’s loss of trust, most of the favorites’ lives ended in tragedy.

[8] Practice dancing, seeking and offering beauties to emperor, choosing to castrate themselves, etc.

[9] A special yet constant way is to advise the emperor in the time of natural disasters, claiming that disasters are a punishment of heaven (天) due to misbehaviors of emperors, often due to them favoring unwise or evil men (小人).

[10] An obvious example would be Philip Kuhn’s book Origins of the Modern Chinese State, in which he identifies the problem between public and private as one of the three constitutional problems in modern China.

[11] The personal relationship of emperor and his favorites seems at first sight secondary and derivative due to the gradual establishment of bureaucracy in the Han. Hou reminds us that such personal ties should be seen as primary and natural compared to the universal impersonal relationship which results from expanding territory of empire.