Inheritance and Development of Modern Drama 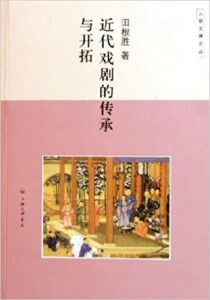 In imperial China, drama was one of the most popular and influential forms of entertainment and literature. The late nineteenth and early twentieth centuries witnessed a major transformation of politics and society, under which Chinese drama also underwent rapid change. Based on his dissertation, Tian Gensheng’s work, Inheritance and Development of Modern Drama, attempts to provide a general description of the vicissitudes of modern Chinese drama, especially jingju (Beijing opera) and chuanqi zaju (legendary drama), from 1840 to 1919. Needless to say, such an ambitious project involves many aspects, including changes in political thought, dissemination of Western culture, rise of new intellectuals, formation of an urban cultural production-consumption system, influence of modern mass media, and so on. Given the close tie between the evolution of drama and the development of cities in modern China, the book focuses spatially on Beijing and Shanghai, two leading operatic entertainment centers during the period under study.

The book is comprised of three parts and nine chapters. The first two chapters constitute Part One, “Establishment of the Beijing school and the divergence between the Beijing and Shanghai schools,” which illustrates the interplay between the geographical relocation of drama centers and the evolution of drama genres. Since the middle Qing period, Beijing, the imperial capital, had gradually replaced Suzhou and Yangzhou as the national center of operatic entertainment. The blend of southern and northern regional dramas in Beijing, plus the change of political circumstances, promoted the formation and popularity of jingju as a genre in the eighteenth and nineteenth centuries. In the late nineteenth century, Shanghai grew into another national center of operatic entertainment. In this energetic semicolonial treaty port, southern and northern dramas went through another blending process, while the influence of Western drama culture increased gradually. It was in such conditions that haipai jingju, or the Shanghai school of Peking opera, took shape in the early twentieth century, which, Tian argues, broke many conventional ideas of Peking opera. Part Two, “The popularity of historic plays and flourishing of current-events plays,” focuses on the production of modern performing literature. It is divided into four chapters. Chapter Three traces the origins of Peking opera plays and their evolution in the modern period; the following two chapters examine actor-produced historical plays (yiren lishiju) and modern current-events plays (jindai shishiju) respectively; Chapter Six presents a brief analysis of the influence of modern newspapers on the production of chuanqi zaju. Part Three explores the development and innovation in dramatic theory in modern China. Chapter Seven looks at the ideas of modern drama critics, whereas Chapter Eight investigates the views of nationalistic intellectuals and revolutionaries about drama; the last chapter takes as its subject changes inperforming thought.

This is an informative book which covers many important aspects of modern Chinese drama. In particular, in Part Two, Tian’s thorough research on the evolution of opera performing literature enriches our knowledge about modern Chinese drama. Several tables and appendixes provide valuable reference materials for students of modern Chinese drama. However, with little originality in terms of research approach or argument, the academic contribution is limited. The time span of this study, 1840 to 1919, is defined as “modern” by many Chinese scholars on the basis of political events. Since Tian gives no explanation for this periodization, one may doubt whether such a time span is appropriate for socio-cultural studies. Stopping at 1919, this book not only excludes the so-called “golden age” of Peking opera, namely the 1920s and 30s, but also neglects the fierce dispute regarding haipai jingju from the 1920s on. There are also several cases of mis-match between the titles and content; many footnotes are not in correct format, not to mention some quotations without sources. Despite these shortcomings, this book makes a significant contribution to the field and deserves the attention of scholars of modern Chinese drama.