Japanese in the Bible: the history of translation 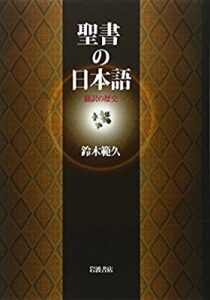 The Bible has been translated into more languages than any other text in the world. The process of introducing new ideas into another language, which is grounded in a different culture, invariably poses difficult challenges. This was certainly the case with translations into Japanese. Norihisa Suzuki’s book describes how the Bible was translated into Japanese and how subsequently Christian words spread in Japanese society.

The main argument of this book is that pre-existing Chinese translations played a vital role in importing Christian words into Japanese. Therefore, Suzuki suggests, in order to understand the acceptance of Christianity in Japan, we need to pay attention to the period when Christianity was imported through China, similarly to Buddhism and Confucianism, beyond a general understanding that it was imported just by Western countries. We find one fascinating example of this complicated translation process in the word “God”. In its first appearance, right after the initial arrival of Christianity in 1549, Catholic missionaries translated “God” as 大日dainichi, “the big sun.” However, realizing that the term was already associated with Buddhism and could refer to female genitalia, the missionaries changed their translation policy from translations based on the local language to direct sound-based translations of the original Latin. After three centuries of persecution, in 1859, Protestant missionaries came to Japan and started to translate the Bible into Japanese. At this time, since the Bible had already been translated into Chinese, the missionaries regularly used Chinese terms to convey Christian terminology. For instance, now they translated the word “God” as神kami, based on Bridgman’s Chinese Bible. This had its own complications however, because the original Japanese connotation of 神kami implied not a single god, but rather multiple spirits, and was also used in Buddhist terminology. These translations caused a transformation of terms from their original Japanese usage, and also had a deep impact on Japanese understanding of Christianity itself.

While other scholars have made similar points, the noteworthy contribution of this book is to comprehensively describe the historical process of Bible translations. The author focuses on 30 words in particular in order to reveal their transition across multiple translations. By doing so, he effectively demonstrates that over two-thirds of these terms were translated from Chinese, and how central Chinese translation was for Japanese understandings of Christian ideas. He also examines the appearance of these terms in dictionaries, and concludes that many Christian words were broadly accepted in Japanese from around 1950. Overall, his book contains much information to guide us through the long and colorful history of Bible translations.

Although it might be hard to have included more in this already detailed work, an additional comparative analysis of other country cases would have helped to better contextualize the Japanese case. For instance, Bible translations into Korean might have provided a good contrast. Although under the same Chinese writing influence, Korean missionaries in Korea avoided direct translations from Chinese, instead preferring to define important key words. Sung Eun Kim (2013) points out that this difference may be related to the way in which writing in Japanese and Korean each has a distinct relationship to writing in Chinese. Korean Bible translations even contributed to the promotion of Hangul 한글 as Korean vernacular script. There is also a striking difference in the number of Christians in the two countries.

This book is aimed mainly at a general audience with interest in the reception of Christianity in Japan, in issues of translation and in language changes caused by new cultural contacts. While this brief review can hardly do justice to the richness of Suzuki’s work, the book is a welcome addition to studies of both religion and translation, and will surely benefit readers with different backgrounds and across disciplines.