The Land Reform Movement and Transformation of Rural Power in Northern China: An Approach of Political History 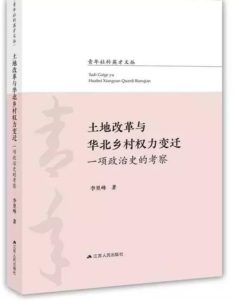 Land reform and rural social change are two of the most basic and important issues in the study of modern and contemporary Chinese history, especially the history of the Communist Party of China. Although there are many previous studies of land reform, Li Lifeng’s new work The Land Reform Movement and Transformation of Rural Power in Northern China: An Approach of Political History establishes a new model through which to study land reform, focusing on political history and the relationship between land reform and rural power changes in Northern China, as well as trying to analyze modern state construction and the institutional changes of the CCP in the revolutionary and post-revolutionary periods.

The starting point of this book is the continuous downward extension of state power and the gradual loss of independence and autonomy of rural society in the 20th century. Land reform is an important part of this social structure change. The author uses land reform archives in Shandong, Hebei, and other places in Northern China as his main historical materials, and uses the path of social science, combining theories and models of political science and sociology to investigate land reform as the object and content of political movement governance of the CCP, while also trying to carry out social research on the historical event of land reform. The in-depth explanation of scientific orientation is not limited to the case of one village, nor to the broad discussion of the whole country. Instead, the macro perspective and micro description are combined to research individual actions, village power structure, political operations and the macro social structures.

This book is divided into three parts. The first two chapters analyze the historical background, policy evolution and redistribution of land resources of the CCP in Northern China. Li points out that the degree of land concentration and class differentiation in Northern China before the revolution was not as high as people usually thought. Therefore, the mobilization of land reform contained political meanings beyond pure economic activities, which involved the discourse of class struggle, and the interaction between the village community’s morality and own interest. Li also reveals the dialectical relationship between continuity and change, expression and practice, moderation and radicalization, and superiority and subordination in the operation of the CCP’s policies. The essence of land reform was to seize land from some people and redistribute resources to others in various ways. During this period, the “over intensification” was obvious. The basic reason lied in the deviation of policy orientation and implementation, the lack of rural social resources and the structural contradiction between the total amount of resources and the mobilization goal of the CCP, and farmers’ attitude of righteousness amid the cruel war environment also aggravated the deviation.

The second part focuses on the problems of the actual operation of land reform in grassroots society. The first is an exploration of the strategies and techniques in the mobilization of rural people. It is believed that the strategies of complaint, class division, material stimulation, propaganda, and emotional mobilization in the land reform had successfully inspired the people. The sentiment of land reform had also become a kind of governance tool and technology to raise social relations and hierarchical order. The second is an analysis of the logic of action among different social classes. Landlords and rich peasants had a difficult relationship under the dilemma of cooperation and resistance, while the behavior of poor and hired peasants reflected the tension between rational peasants and moral peasants. The third is an exploration of the village power structure and operation mechanism, focusing on analysis of the role and characteristics of the poor peasant groups and work teams in the unconventional power operation mechanism. The work team, as an agent of the will of the party and the state, had supreme power in the villages and helped the regime complete the tasks of mass mobilization, resource extraction, elite monitoring, etc. to achieve the goals of rural governance, but the continuous dispatch of task forces to achieve these goals also greatly increased the cost of ruling the party and the country, and inevitably exacerbated the sharpening and centrifugal tendencies of the grassroots elites. The fourth is an analysis of the behavior patterns of rural political elites, by pointing out that grassroots political elites in land reform had multiple behavioral patterns, such as executing the national will, countering state power, chasing their own interests, and so on.

The third part integrates the changes of the state and society before and after land reform, and further discusses changes in the relationship between the modern state and rural society at the institutional level. The author points out that land reform led to further expansion of the state power’s organizational boundaries and functional boundaries. Various grassroots organizations established during the land reform formed an extensive organizational network, which not only greatly expanded the state power organization’s borders, but also contributed to mutual assistance in production, mediation of disputes, and cultural education. The functions of other aspects have also formed substantial domination, and the rural power structure has changed dramatically. This change was most profoundly reflected in the two aspects of taxation and conscription. Reforming taxation in land reform not only solved the disadvantages of unfair taxation and corruption, but also improved the ability to extract financial resources; and the combination of land reform and conscription formed the reciprocal exchange between the regime and peasant class, and helped the regime successfully obtain the human resources needed for the war. However, land reform was just a movement. Li argues that when the movement ended, the changes in rural society in terms of class structure, production relations, and cadre mentality happened again. The transformation of rural society from land reform to collectivization continued many discourses in land reform with three different logics: stage theory, condition theory and substitution theory.

This book is not about the economic significance of land reform, nor just the rural power changes before and after such, but rather the further exploration of the political significance behind land reform and the basic characteristics and pros and cons of the modern state governance model under the leadership of the CCP. Although the mass movement governance model can effectively mobilize rural people, implement the will of the regime, and achieve rural governance, this kind of governance greatly depends on the state of movement in rural society (through task force and grassroots organizations) and requires state power. The continuous involvement of the rural community, the continuous monitoring of the grassroots political elite, and the continuous shaping and strengthening of the legitimacy of the rule are difficult to be included in the regularization and institutionalization track. The advantages and disadvantages of the mass movement governance model are all in the word “movement (运动 yundong)”, which can only be sustained by successive new movements, thus forming a difficult contradiction between the power of social change and the normal state of social operation, and also profoundly and continuously affecting the post-revolutionary state governance model.