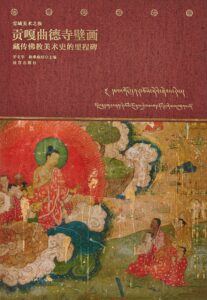 The explosion of publications on the Gong dkar chos sde Monastery murals in the last two decades is due to the paintings within, which can be attributed to the founder of the Khyen ris style, Khyentse Chenmo, who flourished from the 1450s to the 1490s. Khyentse Chenmo was significant due to his radical rejection of the prevailing classic Indic styles with formal red backgrounds, which he began enthusiastically replacing with the intense greens and blues of Chinese landscapes. This phenomenal painting practice subsequently then shaped the fundamental pattern of later Tibetan painting art. An outstanding Sino-Tibetan style gradually occupied the mainstream of Tibetan painting after 15th century, since then Tibetan painters and their traditions developed into a remarkable issue deserving of attention.

The Tibetan art historian Luo Wenhua carried out the fabulous work of his team in this book, which covers two aspects: (1) digitalizing the murals of Gong dkar chos sde Monastery, and  (2) researching the monastery and the murals from different perspectives. The structure of the book is also composed of two independent parts that correspond to the two aspects above.

Part I comprises five chapters. The first chapter studies the monastery’s history and background of the religious sect. In the second chapter, Luo Wenhua examines the original layout and configurations of the monastery based on descriptions in the biography of the monastery founder Sakyapa master, Gong dkar kun dga’ rnam rgyal, and An Account of a Pilgrimage to Central Tibet During the Years 1918 to 1920 by Kah-thog Si-tu chos kyi rgya mtsho. The third chapter provides in-depth iconographical research, which identifies the textual sources and motifs of the murals in different temples.

The fourth chapter is the most ambitious section of the book. It attempts to establish a clear definition of mkhyen ris style based on the analyses of the main characteristics of the murals. The author extracts stylistic characteristics from the murals: (1) the painter(s) are enthusiastic about diversity and creativity, which introduces innovative ideas into the colors and iconographical elements (such as lotuses, robes, and halos), 2) the painter(s) actively incorporated multi-elements, particularly Chinese influences, which thereby distinguished itself from the sense of monotony of conventional Indic-Nepal painting style. Based on this, the author argues that all of the murals in the main hall of gTsug lag khang were painted by mKhyen brtse chen mo and his team. The fifth chapter contextualizes the murals of Gong dkar chos sde Monastery into Tibetan art history, and discusses the significance behind it. Part II is the place within which the author exhibits the excellent results of the digitization of the paintings. The book publishes over 204 high-quality images of the murals, making the excellent artwork of Khyentse Chenmo fully accessible to the general public.

The main goal of this book is an attempt to provide the specific features of the indigenous Tibetan painting school, mkhyen ris, based on the wall paintings in Gong dkar chos sde Monastery. But the characteristics of mkyen ris drawn by Luo Wenhua are actually a major trend of Tibetan painting art after the 15th century. It is insufficient to differentiate mkyen ris from other painting styles. Actually, it is a pending case for investigators to give a clear boundary between these schools. For instance, the renowned Tibetologist David Jackson in his impressive book A History of Tibetan Painting: The Great Tibetan Painters and Their Traditions, states that the mkhyen ris (“style of mKhyen brtse”) “is said to have incorporated some Chinese influences, but evidently not to the same extent that the sman ris (an influential painting school attributed to Sman lha don grub) had.” According to the statement on the style of mkhyen ris and sman ris by 13th Karmapa bDud ’dul rdo rje (1733-1797), “mKhyen-ris artists are said to have used thicker colors than the old sMan-ris painters did, and the mKhyen-ris excelled in particular in the depiction of tantric deities” (David Jackson, 1996. p. 142.). Evidently, this kind of ambiguous description cannot provide us with an essential distinction.

The connection between the monastery and Khyentse Chenmo has been demonstrated by the description of the biography of Kun dga’ rnam rgyal. However, mkhyen ris as a term of particular style in Tibetan art history occurred no earlier than the 17th century. The Gong dkar chos sde Monastery is named as the only place where paintings by mkhyen brtse are extant today, while the mkyen ris was not exclusively associated with the Sakyapa school, it was also found in paintings of bKa’ brgyud pa and rnying ma pa monasteries, such as Yangs pa can dgon and Grwa byams pa gling dgon.

Two difficulties encountered here are: (1) it is hard to find any explicit stylistic definition about mkhyen ris in Tibetan literature, and (2) except for the Gong dkar chos sde Monastery, the original masterpieces attributed to Khyentse Chenmo are unavailable. Therefore, it is impossible to provide a certain criteria or boundary in the Tibetan context to differentiate between these indigenous schools, and it is also difficult for researchers to establish a genealogy of mkhyen ris style in Tibetan art history. However, it could be speculated that the mkyen ris was perhaps a pronoun of the influential workshop lead by the painter Khyentse Chenmo, rather than a distinctive aesthetic system that the master founded. Nonetheless, this book is a pioneer work which deserves our admiration due to the high-quality pictures, ample textual materials, and subtle analysis on the painting style that the author detailed.