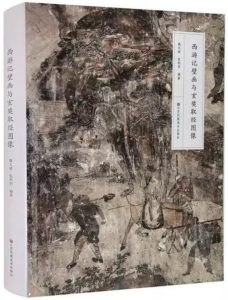 Xuanzang (600-664) was an eminent monk in Chinese history who sought the sutras of India and translated them into Chinese. During the middle and late Tang Dynasties, Xuanzang was sanctified, including Buddhist scriptures and rituals preached in the name of Xuanzang, as well as in the belief of the Shensha god arising from his journey to the west. The story of Xuanzang’s journey to the west has been constantly shaped and enriched during the Tang and Song Dynasties, and the image of “Xingjiaoseng (Itinerant Monk)” became an image representing Xuanzang. This image adds to the plot of Xuanzang’s westward adventure, making it both literary and legendary. With the adaptation of successive dynasties, the plots and connotations of the Journey to the West have been enriched, and the story of Xuanzang’s pilgrimage to the scriptures has developed into a story centered on the Sun Wukong (Monkey King). After the book “Xi you ji (Journey to the West)” was written in the Wanli period of the Ming Dynasty, the stories of Xuanzang’s journey, with stable plots and characters, were quickly formed and widely spread. Therefore, there are a large number of statues and murals related to Xuanzang in monasteries, caves, Taoist temples and other places across China.

The book “Paintings of the Journey to the West and Paintings of Xuan Zang’s Pilgrimage for Buddhist Scriptures” is the first comprehensive collection of pictures of Xuan Zang’s westward journey. The pictures, dating from the Northern Song Dynasty to the Qing Dynasty, were found in grottoes, monasteries, and Taoist temples in China. However, this book is not simply a collection of known images but rather is divided into two parts according to the Xi you ji 《西游记》which was written during the Wanli period of the Ming Dynasty.

The first part consists of the paintings of Xuanzang’s pilgrimage for Buddhist scriptures. According to the regions, times and similarity of content, the author divides the images from Song to Ming Dynasty into six regions. According to the times, the following areas are: Yan’an area (Song and Jin, 14 places); Sichuan and Chongqing area (Liang Song, 3 places); Guazhou area (Xixia, six places); Jinnan (Southern Shanxi), Jinan (Southern Hebei) and Yubei (Northern Henan) area (Yuan and ming, six places); Jinzhong area (Ming, two places); and Longnan area (Ming, four places). In addition, due to their different image sources and connotations with the above regions, the images of Kaiyuan Temple, West Tower in Quanzhou and Feilaifeng Longhong Cave in Hangzhou (three places), were jointly listed in the southeast coastal area, even though they do not belong to the same period. The Jinzhong area, due to fewer images and a lack of clear pictures, is temporary absent. Therefore, the first part is divided into five sections according to chronological order.

In this book, paintings of Xuanzang’s Pilgrimage for Buddhist Scriptures in the 7th niche of Dayi Yaoshiyan, the Tianshui Xianren Grottoes and the paintings of the Journey to the West in the Minxian Qianchuan Temple Bell Tower, Ningxian Tarerzhuang Brick Tower, and Huanxian Xinglongshan Great Buddha Temple are for the first time published, with high historical value.

This book provides materials for studying the transmission route and theme of Xuanzang’s story and provides an abundant and comprehensive picture of materials for scholars in archaeology, art history and literature history to study the images of Xuanzang’s pilgrimage to the scriptures and the journey to the west.