Philosophical Semiotics: The Coming into Being of the World of Meaning 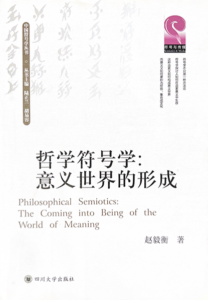 In Yiheng Zhao’s Philosophical Semiotics: The Coming into Being of the World of Meaning, the author attempts to solve the question of whether semiotics is a methodology as is generally held, and if the studies of meaning and the mind can shed light on a series of metaphysical issues, the edifice of semiotics could be erected on the philosophical ground. It proposes that philosophical semiotics is, by necessity, a semiotic phenomenology about the construction of the “world of meaning” by signs, and any discussion about semiotics shall proceed around two core issues: meaning and the mind.

For decades, Professor Zhao has devoted himself to the study of meaning. In this breakthrough text, he builds a theoretical framework of meaning production, experience, and socialization along the path of meaning formation, which provides a feasible methodology for understanding and interpreting the meaning. In addition, in the chapter “Truth and Community,” the author leads an exploration of community truth based on various discussions on previous works of truth, including the theory of correspondence, the theory of consensus, etc., which provide us with criteria for defining “what is truth.”