Shuangkou Village: Identity, Status and Rural Daily Life in the Era of Collectivization 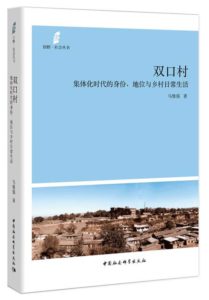 In the period of collectivization, what were the true ideas, feelings and behaviors of ordinary villagers as individual lives? What kind of resistance, adaptation and challenges did they encounter, when faced with the communist state system and symbolic discourse? Ma Weiqiang’s “Shuangkou Village” is a new way to answer these questions. By analyzing a village in the North China Plain and taking the different “identities” of the villagers as starting points, Ma reveals the rich aspects of the villagers in the collective period. Different from the macro research focusing on upper level systems or the meso research on province and county levels, Ma pays attention to micro spaces—small villages, and micro subjects—ordinary villagers. In the vertical dimension, he makes observations from individual to the peasant group, then from the village to the country; in the horizontal dimension, he integrates class struggle, public management, production, emotional expression, marriage, daily customs, social interaction, power possession and religious beliefs all together, and then probes the social system and social structure of collectivization.

This book also responds to two different but interrelated academic contexts. The first is the model of state-society, from totalitarianism to new traditionalism, from the omnipotent state to state capability (Theda Skocpol, 1979; Vivienne Shue,1988; Zou Tang, 1994; Andrew G. Walder, 2009), state system and social governance were taken as the ultimate goals, but also turned to care about people in the grassroots units. This book also shows deep concern for the country and society and analyzes the small village under the context of state-society. The second is the research context of daily life history. Under the influence of the micro turn of Anthropology and Sociology, historiography in the 20th century turned to new cultural history, psychology history and personal life history and so on. As for the study of China’s collectivization, there are also some micro studies, such as Stories of Lin Village (Huang Shumin, 2002) and Private Life under Socialism (Yunxiang Yan, 2003), which describe continuous changes in the village before and after the period of China’s collectivization. The book also focuses on the daily life of individuals and groups in the village during the collectivization period, highlighting the self-expression and self-writing of people in the village.

It can be seen that this book has its own characteristics: first, in terms of historical materials, it is based on the rural grassroots files of Shuangkou village, mainly including personal files, political files, and the economic files of each team. More importantly, the files record many “wrong behaviors” and “criminal activities” that violate national policies and provide evidence for the real rural scene. Second, it focuses on a small village and grassroots or “pipsqueak” people, focusing on the intentions, demands, anxiety, desires and behaviors of individuals and groups, rather than on a broad national and social perspective. By making use of the materials written by villagers rather than officials, it tries to “let them speak by themselves” and sketches out the trivial, gloomy, and even painful aspects in life. Third, on the basis of villages and different “identities” of villagers, it outlines the specific social relationship networks and social structures of Shuangkou village, the response to the national system in the period of collectivization, and reveals the destruction, transformation and reactions in personal lives to the national system.

However, there are also some problems in the book. The first is the issue of archival materials. Although the author fully explored and utilized the grassroots rural archives and noted “false” materials and the profound significance of the “false” materials, he still fell into the material pattern of political expression in the process of discussion. For example, when describing “extramarital love,” Ma mainly uses personal inspections and confessions during political movements, so as to get the point of view of political regulation on morality and emotion, but the book lacks an investigation into other reasons or complex social relations that may exist outside the personal expression discourse. (p191) Then, theoretically speaking, the author reviews two academic contexts. The author not only wants to differentiate from the deconstruction and reconstruction about the relationship between country and village in the context of the state-society model, but also tries to distinguish from the “Other” narration of previous social history and daily life history. He wants to begin with the “Self” narration of the villagers and goes back to the “human,” in order to find the practical logic and direction under the collectivization system, and to construct a new narrative model of national politics and rural politics. However, it shows a vague theoretical or ambiguous orientation in the process of the author’s narration and debate. That is to say, although the author emphasizes the self-feelings, deep-rooted concepts and multi-dimensional activities of the villagers, in order to show the significance of the lives of individuals under different identities, he is unable to break through the restrictions of official narratives and class expression of the materials and tends to go back to discuss adaptation, adjustment and strategic responses to the national collective system under the theoretical framework of state-society. Fundamentally speaking, although he has the consciousness of theoretical criticism and theoretical innovation, he does not break through the existing theories and narrative frameworks. Between the state-society model and daily life history studies, he has not found a self-consistent theory, nor established a new theory or explanation. Finally, there are some minor errors, such as mistakenly referring to the title of Georg G. Iggers ‘s book as Historiography in the Twenty-First Century (instead of Historiography in the Twentieth Century).

“Going to the field and society” is particularly important for the study of Chinese history, especially the history of the period of collectivization. Only when we find the essential texture and real logic of social grassroots in the field can we understand the relationship between the state and society, system and practice in depth. This is the biggest inspiration of Shuangkou Village. However, there is still a long way to go when considering perspectives for going into the field and the subsequent analysis of frameworks when out of the field.