The Story of Hong Kong in the 1970s Retold 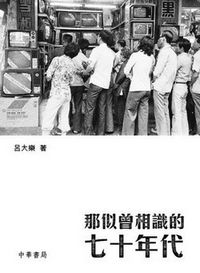 With the present and future of Hong Kong currently under intense debate, Lui Tai-lok’s revisiting of the historical narratives of contemporary Hong Kong is especially timely. The dominant narrative of the city is that, after the chaotic 1960s, Hong Kong was headed on a track of modernization in the 1970s and developed into a modern city characterized by a clean government, prosperous cultural industry, and a population with a sense of local identity.  Lui Tai-lok, a sociologist who focuses on Hong Kong studies, questions this linear and evolutionary narrative. Based on archival analysis and personal memory, the author tries to address an under-examined question: how did the dramatic transition happen in the 1970s? And how did common people experience it?

From the perspective of daily life under British colonial governance, the author illustrates the twists and turns in the making of contemporary Hong Kong. Chapter 1 embarks on a critical examination of the social reality in the mid-1970s, when “contemporary Hong Kong” had not yet come into being. From Chapters 2 to 6, the author highlights a series of significant social events, and investigates how these lived experiences were shaped by multiple frameworks. On the one hand, he throws new light on the question by introducing the lens of colonialism. Chapters 2 and 3 delineate the mutual constitution between the relaxed colonial governance and the intended detachment of common people from the colonial bureaucracy, which partly resulted in an indifference to the preservation of colonial architecture and its subsequent disappearance. On the other hand, the author strives to understand the formation of contemporary Hong Kong against the backdrop of the Cold War. Chapter 4 looks at the politics of football and how it is related to the contestation between the Chinese Communist Party and the Kuomintang.

Following an examination of the social ethos before the formation of contemporary Hong Kong, the next two chapters illustrate how new structures unfolded. Chapter 5 delves into the changing landscape of consumption space. As the author discovers, thanks to the colonial network, local people actively remade the emerging consumption centers into cultural spaces to embrace modernity. Chapter 6 shows how a new social order and local public culture grew out of the social campaigns launched by the colonial government, which intended to develop an incomplete idea of citizenship.

This book offers new ways for thinking about the making of contemporary Hong Kong. Lui reconstructs life under British colonial governance from the perspective of local people. Human beings, in his eyes, don’t passively act according to the imposition of social structure. Instead, they are important players with human agency, whose actions usually complicate the operation of social structure in ways that can unexpectedly make history. Lui insists on interpreting Hong Kong as a constantly changing historical product growing out of varied, unintended human actions, rather than as an essentialized entity with a pre-assumed fate.

It would be interesting to read this book alongside Pacific Crossing: California Gold, Chinese Migration, and the Making of Hong Kong (by Elizabeth Sinn). Focusing on the making of Hong Kong in the second half of the nineteenth century, Sinn’s book delineates the unfolding of multiple social institutions in response to the gold rush across the Pacific, connecting Hong Kong to California. How were these accumulated historical resources reused or reinvented later, and by whom, especially in the context of the Cold War? How did they reshape the social landscape of Hong Kong? Lui has taken a first step to open up Hong Kong’s history by locating it in a colonial network. It might be fruitful to go back further, taking the “Pacific Crossing” into consideration was we rethink the shifts in Hong Kong’s destiny.