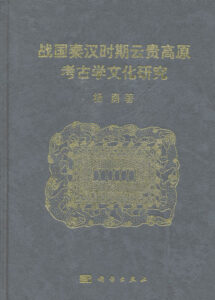 For a long time, Southwestern Barbarians (西南夷) remained a mystery due to the lack of historical records available to archaeologists. Yet, after decades of work, a large number of materials have been accumulated in this area, especially the Yunnan-Guizhou Plateaus, which offer further possibilities for comprehensive discussions. This book,A Study on Archaeological Cultures in the Yunnan-Guizhou Plateau from the Warring States Period to the Han Dynasty, is based on such groundbreaking archeological work and provides new insight into understanding ethnic groups, society, and culture in Southwestern China.

The body of this book can be divided into 5 parts and organized as follows. Chapter 1 is a literature review of existing research and a detailed introduction about the research project. Chapters 2 through 8 consist of a detailed investigation into the local native bronze cultures in the Yunnan-Guizhou Plateau. Chapter 9 discusses the communication of Han culture in the area during the Han Dynasty and the interaction between Han and local cultures. Chapter 10 explores the social changes and cultural transformations based on archaeological and historical materials. Chapter 11 is a theoretical discussion about the relationship between archaeological cultures complexity and ethnic identity.

Compared with other works, this book clearly classifies archaeological culture into two categories, namely local native bronze cultures and Han culture. The distinction between these two types is mainly based on archaeological cultural characteristics, especially when focusing on burial materials. The local native bronze cultures lasting from the Warring States Period to the Han Dynasty and separated into 8 regional groups in terms of archaeological materials, including Northeast and Southwest Guizhou (Chapters 2), Zhaolu Basin (Chapters 3), Dian Lake (Chapters 4), East Yunnan Highlands (Chapters 5), West Yunnan Highlands (Chapters 6), Hengduan Mountains (Chapters 7) and Southeast Yunnan (Chapters 8). Han culture lasts from the Western Han Dynasty to the early Eastern Han Dynasty which was derived from Han migrants (Chapter 9). Yang Yong’s work helps us to understand the complexity of such cultures and the societal change in Southwest China during the Warring States Period to the Han Dynasty.

Secondly, the author makes a cautious judgment on the date of different archaeological cultures. Those familiar with archeology in Southwestern China know that issues surrounding dating have always plagued researchers and so far no consensus has been reached. On the one hand, archaeological materials are not systematic in many areas, while on the other, there is a lack of radiocarbon dating data. This book fully realizes the seriousness of the problem. In order to solve it, the author not only focuses on typical cemeteries and establishes a reliable chronological sequence, but also conducts comparisons within a wider perspective. The author judged most of the remains from late Warring States period to the Han Dynasty.

Thirdly, the book emphases the spread of Han culture on the Yunnan-Guizhou Plateau. This topic is closely related to the expansion of the Han Empire, and is also an important perspective for an in-depth understanding of social and cultural changes in southwestern China. Starting with burial evidence, this book discusses the history of Han migrants in Yunnan-Guizhou Plateau and the cultural interaction between the Han and local people.

Lastly, the ethnic identification presented in this book is worthy of attention. Combined with limited historical records, the author attempts to infer the ethnic groups in different areas based on archaeological evidence, and the conclusions are more detailed than previous studies. Also, the last chapter of this book specifically discusses the relationship between archaeological culture and ethnic identity.

In sum, this book is up-to-date and of great academic significance. For each representative site, the author conducts a detailed analysis on cultural chronology, regional interaction, ethnic identification and social economy. More importantly, the author has numerous reflections on archaeological theories and methods in this area. All in all, this book provides many exciting elements and is a must read for archaeological research on Southwestern Barbarians.