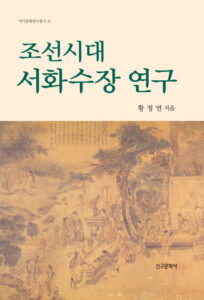 This book explores the history of collecting calligraphies and paintings and the connoisseurship of their collectors in the Chosŏn dynasty (1392~1910), including the period of Imperial Korea (1897~1910). Based on the author’s doctoral dissertation published in 2007, the book consists of five main chapters besides the introduction and the conclusion. The first chapter describes the general socio-economic backgrounds presumed to affect the taste and acquisition of collectors, and the subsequent chapters aim to specify the collections according to the social status of collectors in the quadruple division of the Chosŏn period.

The significance of this book rests on the fact that it is the first full-fledged attempt to explicate the cultural aspects of collecting calligraphies and paintings throughout the Chosŏn dynasty. Unlike prior research that focuses mostly on the creators of such art—calligraphers and painters—and the collections of particularly selected individuals, the author presents extensive records of the collectors stratified from kings and royal clans to scholars and high to middle-class officials, and brings them to the fore to reveal the influence of their taste and patronage on the creation of art works of the time. The comprehensive investigation of documentary material proves to be effectual, especially as a supplement for the lack of available records and intact works of art from the first quarter of the Chosŏn period, though a relatively shorter chapter on this period is still inevitable.

However, despite being such an important accomplishment, the classification of chapters according to chronological order does not adequately fit the author’s intention to follow the overall trend consecutively in the book. Subcategorized by the social status of the collectors, each chapter contains overlapping materials from each division of the period across the sections. Thus, the iterated analyses and descriptions occasionally become distracting. This formation of chapters is understandable in a sense that the book originates from a dissertation, often expected to follow the conventional manner of organizing chapters. But what the author pursues could be better achieved if the chapters were categorized primarily by the social status of the collectors, rather than the division of periods.

Yet, it is evident that this book deserves acclaim as the fruit of the author’s endeavor to compile relevant resources and take them into account on the whole, including the sociocultural context surrounding objects of art throughout the over 600-year long history of the dynasty. This effort also makes an indisputable contribution to the balanced understanding of the history of art in Korea, by suggesting a way to comprehend the history of calligraphies and paintings from the perspective of the appreciators, proven to be closely intertwined with the works of their creators.