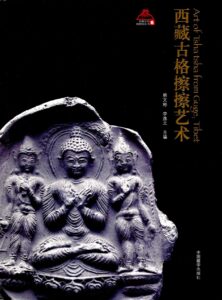 Surveys of the artistic heritage of the Western Himalayas, a fascinating region of Tibetan culture which includes the Ngari district (T.A.R), Ladakh, Zanskar, Spiti and other places in northwest Nepal, have been conducted by international scholars. As an important center of “phyi dar” (second propagating Buddhism), enormous cultural relics remain in this region, and most academic attention is paid to these monuments, murals and manuscripts. To some extent, that overshadows another modest, very interesting type of artwork, the tsha-tsha (ཚ་ཚ), which are unique miniatures in clay.

The present volume, which explicates the craft, scripts, ritual, symbolism and style evolution of the tsha-tsha in Gu-ge, provides a comprehensive presentation of tsha-tshas in Gu-ge Kingdom. As an important ritual object, the tsha-tsha has significance for researching the evolution of style, the development of deity worship, and consecration practices in the particular region.

This book consists of three parts: First, the introduction, which includes three articles by three authors, the first written by Zhang Jianlin, introduces the academic history of Gu-ge tsha-tsha. The second, by Liao Yang, is a profound study of ritual texts on tsha-tsha, consecration mantras, and corresponding deity worship in tsha-tsha. The third article, by Li Yizhi, attempts to contextualize the craft and style of Gu-ge tsha-tsha as part of the art history of the western Himalayas, and presents the evolution of Gu-ge tsha-tsha during the 11th to 17th centuries. Second, the book contains a catalogue, which is divided into 11 sections based on subjects of the tsha-tsha:  Buddha, Bodhisattva, Female deities, Protectors, Yidam, Guru, Stupas, Mandala, Mantra, Consecrated objects in Caitya tsha-tsha, and molds. There are 277 illustrations in total with detailed descriptions, including 267 tsha-tshas, 6 consecrated objects, and 4 molds. Third, the book’s appendix includes a chart assembling all mantras represented in the tsha-tshas featured in the book, and a supplement representing 74 tsha-tshas.

The most impressive part of this book is the discussion by Liao Yang on the deities and corresponding mantras, the ritual of tsha-tsha making, and the conception of Buddhist relics, based on Tibetan, Chinese, and Sanskrit texts and image materials from other regions, including India, China, and Kotan. The mode of thought of consecration in Gu-ge tsha-tsha also appears in many other Buddhist materials in different regions. A magnificent cross-cultural scene has been vividly drawn out through such modest clay miniatures. While Giuseppe Tucci previously interpreted the symbolism and terminology of the tsha-tsha and related rituals based on Sanskrit and Tibetan resources, he was not aware of the important value of Chinese and Tangut materials, and the existence of similar tsha-tshas in other regions of China.

Furthermore, Zhang Jianlin and Li Yizhi provide a systemic conception of the tsha-tsha in Gu-ge, based on style, craft, motifs, and subject. A basic mode of dating is present. In fact, Giuseppe Tucci also attempted to date by Sanskrit script or mantra in tsha-tsha, which we could see from his renowned work Stupa, Art, Architectonics, and Symbolism: Mchod-rten and tsha-tsha in Indian and western Tibet, contribution to the study of Tibetan religious art and its significance, Indo-tibetica, Vol 1. A rough era range could be provided, but accurately speaking, the object which Tucci dated is the tsha-tsha script, rather than the tsha-tsha itself. Inaccuracy would be inevitable, as the usage of Sanskrit script in tsha-tshas is more stable than style and craft. Apparently, stupas or other spaces used for storing tsha-tshas, with clear historical information, would be the best foundation to most accurately date the tsha-tsha.

Li Yizhi attempts to build a clear development of the art of tsha-tshas in Gu-ge kingdom from the 11th-17th centuries, which is mainly established on the history of paintings in western Tibet. The 11-12th and 15-16th centuries, as two golden ages for Gu-ge tsha-tsha, and for paintings as well, are emphasized by the author. Most of the tsha-tshas in this book are dated into these two periods. The basis for this idea is that tsha-tsha mold makers had a similar training background with that of mural or thangka painters and sculptors in this region, or they were directly inspired by paintings. But information about mold making or mold makers is still unknown. Besides, the relationship between tsha-tshas and paintings or other visual artwork is still obscure. In fact, it is hard to define the tsha-tsha as “visual” art. It does not exist for being watched or admired, but rather serves as a kind of sacred object enshrined in a closed space such as a stupa. There is no doubt that visual similarities exist between tsha-tshas and early paintings in the western Himalayas, but the possible relationship between tsha-tshas and other primary visual artwork should be discussed as a prerequisite.

The remarkable analysis on the craft of tsha-tshas with regional characteristics, which is mainly based on shape and external form, is presented comprehensively in this book. But early tsha-tsha molds, as vital materials, are still scarce for scholars, and only four tsha-tsha molds (2 from the 11-12th centuries and 2 from the 15-16th centuries) are collected in this book. Additional findings and texts about early molds and mold makers would put forward more valuable information. The book publishes numerous precious tsha-tshas which cover all stages of the Gu-ge kingdom, and gives a comprehensive study of the material and cognitive dimensions of tsha-tshas. This also distinguishes it from a common catalogue.