The Harvard-Yenching Institute is pleased to announce that HJAS (vol. 81, nos. 1&2) has been published. It is a Special Issue on Slavery in Early Modern East, Inner, and Southeast Asia, with 10 original research articles, an introduction and afterword by leading scholars of slavery in East Asia, and additional supporting materials (art, maps, documentation and translation of primary sources). The journal is available online at ProjectMuse.

We spoke with Dr. Melissa Brown, HJAS Managing Editor, about the publication of this special issue:

Could you introduce this special issue to readers?

Until quite recently, many scholars would not consider the forms of bondage that existed in East Asian history in terms of slavery. In 1995, in the pages of HJAS (55/2), James Palais called out this rationalization specifically for Chosŏn Korea (1392–1910), which Palais called “a slave society.” But it is still only recently that scholars have begun to seriously engage with the concept of slavery in eastern Asia. Lúcio de Sousa’s introduction discusses this invisibility and the importance of moving beyond it.

This special issue thus contributes to Asian studies by bringing considerations of slavery to a wide range of historical practices of bondage across China, Japan, Korea, Mongolia, Siam, and the Dutch East Indies. It also contributes to global slavery studies by sampling the variety of ways that Asian forms of slavery were legally institutionalized—ways that were often far different from the practices of the transatlantic region. Johanna Ransmeier’s afterword refers to this variety as a “dynamic spectrum” of slavery. In early modern East, Inner, and Southeast Asia, forms of bondage gave some people legal rights to the labor, bodies, and children of other people. The articles in this issue suggest that these institutions should be examined through the lens of slavery, regardless of whether the people held in bondage were formally labeled as “slaves.”

As David Howell notes in the editorial preface, the contributors to this special issue reveal both the diversity of the manifestations of slavery as a legal institution and the inescapable fact of bondage that applied even to people not formally enslaved. Six authors discuss aspects of legally institutionalized slavery in Korea (Sun Joo Kim, Hyun Suk Park), Mongolia (Sam Bass), China (Claude Chevaleyre), the Dutch East Indies (Adam Clulow and Si-yen Fei), and Siam (Eugénie Mérieau). Four authors discuss bondage outside a legally constructed category of slavery; they discuss the trafficking of young women in and beyond China (Stuart McManus) and Japan (Kristin Roebuck); the enslavement of Koreans during Japan’s invasion of Chosŏn (Nam-lin Hur); and women as marginalized and fungible figures in the Chinese household and lineage (Tina Lu) and in Japan (Kristin Roebuck). The articles reveal how far we have come in our understanding of slavery in eastern Asia as both an institution and a social condition since James Palais published his lament in HJAS (55/2) two decades ago (1995) that some East Asian “historians rationalize [slavery] as another form of hierarchical social relations.” 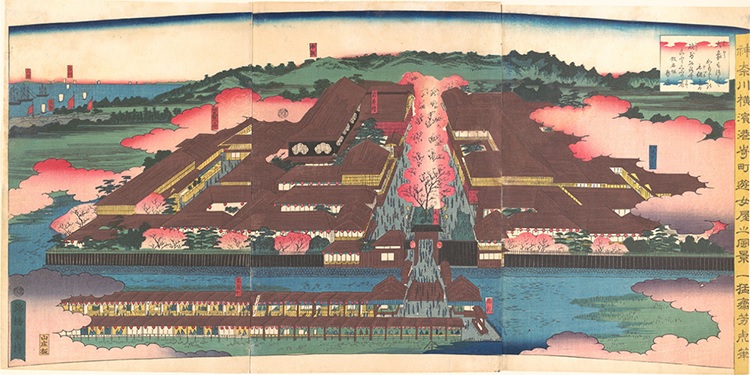 This special issue also demonstrates that the status of women was an important factor interacting with forms of slavery. As Kristin Roebuck says, “Freedom had a gender.” All the articles explicitly address women’s status, at least briefly, and five focus on women (Adam Clulow and Si-yen Fei, Tina Lu, Stuart McManus, Hyun Suk Park, Kristin Roebuck). Johanna Ransmeier’s afterword concludes from these articles that we need to stop examining the mechanisms of domesticity as separate from the problems of slavery.

How did this issue come to fruition?

A few years ago, an individual manuscript was submitted on the topic of slavery, and that submission led to a series of discussions, between David and myself, and later with Karen Thornber, who was then the Asia Center director, about a special issue on slavery. We were able to do a call for submissions and a series of Zoom workshops to bring the authors’ submissions into better conversation with each other.

We are grateful to the Harvard-Yenching Institute, as well as the Harvard University Asia Center and Weatherhead Center for International Affairs at Harvard, for their generous support throughout the process of producing this special issue.

Could you tell us a bit about the journal cover image? 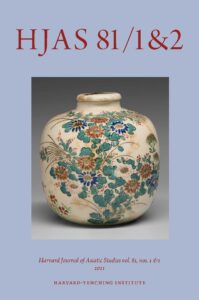 The cover image is also related to the theme of slavery. The lovely jar featured on the cover, held by the Harvard Art Museum, is a 19th-century example of Satsuma ware, a style of Japanese ceramics  As David explains in his piece “About the Cover,” Satsuma ware originated in Japan about 1600, when seventy-some Koreans captured by invading Japanese troops during the Imjin War (1592–1598) established kilns there. Korean potters and their descendants in the Satsuma domain, although not further trafficked, were also not free. Descendants of these enslaved Koreans produced this piece—and other renowned ceramics in western Japan—in addition to supplying Korean-language interpreters to the Satsuma domain throughout the Tokugawa period (1603–1868).

What other supporting resources about slavery are available in this issue?

The frontispiece map—by Jeff Blossom at the Harvard Center for Geographic Analysis and myself—provides an orientation for scholars reading outside their areas of specialization by showing the indigenous and colonial polities circa 1700 for eastern Asia. Political authority in much of this area was ambiguous or contested for another hundred years or more. By consulting with authors (Lúcio de Sousa, Adam Clulow, Sam Bass) and some additional scholars of Southeast Asia (Chris Baker, Bradley Camp Davis), we were able to construct a map that approximates the multiplicity and ambiguity of political authorities at that time. We are grateful for their guidance and take responsibility for remaining imperfections in the map.

Documenting these available resources will contribute to better cross-regional and global analyses of slavery.