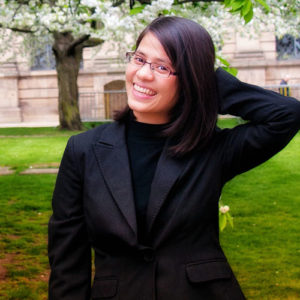 Trang Phan hadn’t originally planned to study linguistics, instead thinking she would pursue studies on pedagogy or journalism. “Linguistics wasn’t my first choice at college – it was the last resort! When I started, I was thinking, I’m going to change it next year.” Before starting her undergraduate studies, she had attended a specialized high school where she focused on literature. “I was never top of the class. I’m more into logical thinking, social science…for English, I was top for grammar, but I couldn’t speak a word.” Although studying linguistics hadn’t previously occurred to her, she found that the field was an excellent match for her interests and strengths. “Studying linguistics opened up a new way of thinking and I got into it immediately. I got top marks on the two most challenging courses, which made me realize it was something I’m good at. I didn’t know that before! I was into linguistics from that time.”

At the same time, she completed a second degree in English, as a compliment to her linguistics degree. Hailing from a small town, she found her classmates from Hanoi had a much higher level of English proficiency. “I was shocked by how they could express their thoughts in English, it seemed to come at ease to my peers. I just read in English and passed the exams, but never spoke.” Her burgeoning interest in linguistics provided another reason to take on a second degree: “The motivation to study English was to read books on linguistics in English. If linguistics books were written in alien languages, I would definitely have pursued another degree in alienese!” After completing her undergraduate studies, she went to England to complete her PhD in Linguistics. 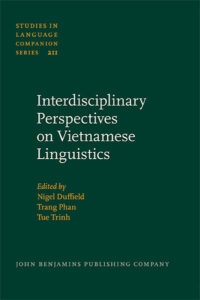 Now teaching at Vietnam National University in Hanoi, Professor Phan’s research looks at Vietnamese linguistics and what the language’s unique characteristics can bring to contemporary debates in the field. Her research often compares Vietnamese and Chinese linguistics, the latter more well-studied than the former. “As a linguist, my ultimate aim is to not be overwhelmed by what people say about Chinese. The literature on Vietnamese linguistics is so thin – [the perception is that] the serious research is about Chinese, or Korean, or Japanese. My challenge is to stay truthful to my Vietnamese intuition – to show that this is what my language is about, not what other people think it is.” This involves showing what makes Vietnamese different linguistically from Chinese and other Asian languages. “What are its unique characteristics compared to Asian languages, including Thai, Korean, and different dialects of Chinese? The most common assumption in linguistics is they tend to categorize Vietnamese as similar to a dialect of Chinese. My current project on Vietnamese plurals and classifiers, compared to Chinese, asks the question ‘what else can we learn from Vietnamese that we didn’t already know from Chinese’?”

Her current research looks at the co-occurrence of plurals and classifiers (also known as ‘measure words’ or 量词) in Vietnamese and Mandarin Chinese. She seeks to examine a widely held view in linguistics that classifiers and plurals cannot both occur within the same noun phrase. She notes that this is not the case in Vietnamese, where plural markers and classifiers do co-occur. How, she asks, can this be squared away with the widely held typological generalization that they cannot?

Phan finds the answer lies in the typology of plurality. “This is where Vietnamese stands out as a typologically rare language. The co-occurrence of classifiers and plurals is actually quite widespread, despite what typologists claim. They always co-occur somehow, especially in classifier languages.” Typologists predict that languages with classifiers (such as Mandarin or Vietnamese) won’t have plural markers (like -s in English) nor definite articles (like “the”). (“At least the well-behaved ones shouldn’t!” Phan notes.) Although there is no equivalent of “the” in Chinese or Vietnamese, the case is more complex for plurals. “In my research, I compare Vietnamese plurals to the English -s and Chinese –men (们). Strikingly, we expect Vietnamese plurals should be more similar to the Chinese –men than the English -s, typologically speaking, but from tests I have shown the opposite is true. In Vietnamese, there are two plural markers. One is more like the English -s and the other is like the French les (plural plus definite). Vietnamese plurals are interesting in that despite the superficial differences, they are much like English -s underlyingly.”

Phan thinks that her findings on the typology of plurals in Vietnamese and Chinese could shed new light on general linguistic theories about the syntax and semantics of nominal phrases, including Gennaro Chierchia’s Nominal Mapping Parameter. Although her findings may initially seem to contradict the theory, Phan instead shows through in-depth analysis of Vietnamese how the exceptions regarding plurals and classifiers are systematic. These systematic exceptions are an “escape hatch” of sorts, she explains – “as long as there is an escape hatch of Vietnamese, there can be an example for other languages to follow, like Yi. Now we have languages that have exceptions, but there’s a way to account for them – the exceptions are predictable. We’re expanding the empirical landscape but strengthening the theoretical core.”

Now half-way into her fellowship at HYI, Prof. Phan remarks on how fruitful the past few months have been for her as a scholar. “I’m in the best period of my life! I feel like I’ve never been more productive in my life. The connections that I have had with people in linguistics at Harvard have been so stimulating. I meet with my mentor (Prof. Gennaro Chierchia) regularly and we discuss non-stop for 2 hours.” In addition to auditing multiple classes in the Linguistics department, she has been working on a monograph covering her past decade of work, including her dissertation, post-doc studies, and government grant-supported research, which all centered on tense and aspect. At the same time, she has started writing on her latest findings: “Over the break I also wrote a paper with my mentor because it’s time to write – there are too many things in my head already! I needed to get it out onto paper.” Reflecting on her time at HYI so far, Phan describes how her experience has continued to shape her. “I was born as a linguist in Hanoi, and did a different type of linguistics in England and Belgium, and then I went to Harvard – each place has a different style. I feel like I’m a student again, I always want to learn new things.”